Children going for operations in a Lincolnshire hospital can now ‘zoom’ from the ward to theatre, after a fundraising donation with a difference.

More than £800 was raised thanks to a charity football match, with the cash earmarked to go towards a new initiative for children’s theatres at Pilgrim Hospital, Boston, including the purchasing of an electronic ride-along car to transport some of the younger patients into the operating theatres. 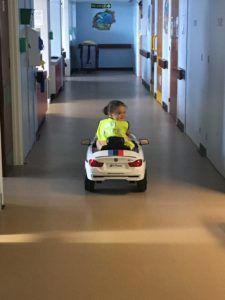 Sam Goy, ULHT’s matron for theatres said anything that can make a youngster’s time in hospital a little bit happier was very welcome indeed.

“We have already secured the purchase of one electronic car, and have three smaller push-along versions for the younger children, and they just help to make the children’s journey to theatres that little bit easier,” said Sam.

“This new money will allow us to buy a second electronic car, as well as assist in improving other areas of the children’s journeys to the operating theatre.”

The money was raised thanks to a ‘friendly’ football match between two of the town’s well-known car dealerships, Drayton Kia and Audi JCT, which took place at Boston United’s historic York Street ground recently, with team Drayton donating all their proceeds to the Pilgrim patients’ fund.

Regarding the generous donation Sam added: “There was a really great atmosphere during the football match, with a healthy rivalry between the two car dealerships.

“It was a well-supported event by the public who purchased tickets and Drayton’s kind donation will really help towards improving the paediatric journey and the general theatre environment.”

The match ended with a hard fought 3-2 victory for Drayton Kia, with Audi nearly equalising in the dying seconds.