Dementia patients and their families are being supported to get involved in research, after all three of Lincolnshire’s NHS Trusts and Lincolnshire County Council joined forces and pledged to be Join Dementia Research champions – the first time a whole county has promised to get behind the national campaign. 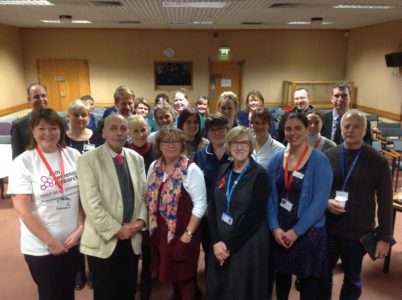 Dementia patients and their families are being supported to get involved in research, after all three of Lincolnshire’s NHS Trusts and Lincolnshire County Council joined forces and pledged to be Join Dementia Research champions – the first time a whole county has promised to get behind the national campaign.

By 2025 it is predicted more than one million people will be diagnosed with dementia in the UK. The National Institute for Health Research (NIHR) wants their Join Dementia Research (JDR) campaign to boost research participation by connecting people in Lincolnshire to suitable dementia studies across the East Midlands.

JDR is open to everyone, with or without dementia, and will contribute to future insights into dementia and its causes, as well as early diagnosis, better treatment and quality of care.

She said: “We’re looking for people to take part in a number of studies, ranging from clinical trials of new treatments to studies of healthy people in middle age, so we’re also keen to reach both patients and their friends and families.

“This is the first time we have had a county-wide pledge and I know what is happening in Lincolnshire is being watched with interest.”

Associate Director for Patient and Public Involvement and Engagement at NIHR Derek Stewart OBE added: “If we can get this to work in Lincolnshire with all its rural complexities then it is possible anywhere in the country. Wouldn’t that be fantastic.

“JDR is something we can all be a part of. We can be part of the solution, rather than just asking doctors for the answers. I do believe we will get a breakthrough with this, it is all about diagnosing people early and empowering them.”

Lincolnshire Partnership NHS Foundation Trust (LPFT) was the first NHS trust in England to sign up to the campaign as an organisation and staff across its services are now actively promoting the programme to patients, their families and friends.

LPFT Research and Development Coordinator Tracy McCranor said: “LPFT is proud to support Join Dementia Research. In the research team we know first-hand the benefits that it brings in connecting members of the public directly to researchers and many Lincolnshire residents are now taking part in dementia research as a result of registering to JDR.”

ULHT’s Deputy Chief Nurse Jennie Negus helped to organise the county’s recent launch event at Lincoln County Hospital. She said: “The whole topic around dementia is something that is very close to my heart, both on a professional and a personal level.

“Initially the plan was for ULHT to follow LPFT’s lead and sign up for Join Dementia Research. Then we heard Lincolnshire Community Health Services NHS Trust were interested and with the county council’s refresh of the Lincolnshire joint dementia strategy, it was agreed that we would all just embrace this for our patients and their families across the county.

“This is something great to get a hold of and fly the flag for Lincolnshire.”

Lincolnshire County Council’s Executive Councillor for Adult Care, Patricia Bradwell, said: “This is an important step in working together to help everyone affected by dementia, we’re delighted to support the join dementia research campaign and would encourage everybody to get involved.”

Eddie Alder from the East Midlands Clinical Networks said: “I am really excited about the work being done in Lincolnshire, it is a key component to driving up diagnosis rates in the county. Having join dementia research as a resource has been described by some as a gift and you will lead the charge as the first county embracing this with all three NHS trusts embracing this as JDR champions. We are really excited to see how this grows in Lincolnshire.”

To find out more about signing up to join dementia research, visit www.joindementiaresearch.nihr.ac.uk