A 27-year-old COVID-19 survivor with no underlying health conditions has thanked NHS staff for saving his life and enabling him to watch his two-month-old son grow up.

Posted on November 18, 2020 in Announcements

Aaron Davenport was warned he may not survive as doctors and nurses battled to save his life at Lincoln County Hospital. 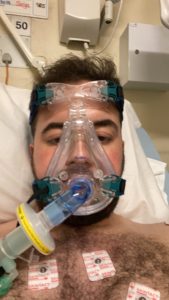 The plumber first felt unwell on Saturday 24 October when he was out at the pub with a friend. It was the first time he had been out since the birth of his son Rae in early September.

Aaron said: “I felt like I had a bit of man flu, but I had been working hard and with a newborn baby I thought I was just tired. The next day we went out pumpkin picking and it was when we sat down to eat dinner that I realised I couldn’t smell or taste anything. I had my test at 6pm and by 9am I knew I had COVID-19.

“For the next few days I was really tired and then I started to get really out of breath. It got so bad that we had to call the ambulance and I was blue-lighted to Lincoln A&E. The paramedic was amazing, from the moment he took my sats and realised how poorly I was he never left my side.”

Aaron was monitored in resus before being transferred to a ward.

He added: “Deputy Sister Janine Burnett came down to take me to the Medical Emergency Admissions Unit (MEAU) where she and all of the team were amazing. They were like my guardian angels and deserve so much credit for the care they provide.

“It was a real eye opener when I was told how much damage it was doing to my lungs and how poorly I was. They warned me that if I didn’t improve they would need to take me to intensive care, I knew that if I was intubated it would be so much harder to recover.

“The staff were amazing and I was kept on the ward and put on a CPAP (continuous positive airway pressure) machine to help me breathe. I was also given a trial drug and for the next two-and-a-half days I just fought with every ounce of my being. Janine even stayed on after her shift to make sure I was OK one day. The care I received was simply the best and I will never be able to thank them enough. Because of them I will be able to watch my son grow up. How can you ever thank someone for that?”

Aaron was later moved to Navenby Ward for further care, before being allowed to go home after six days in hospital.

During his stay in hospital, Aaron’s partner Emily Greatorex was at home with Rae having to self-isolate. 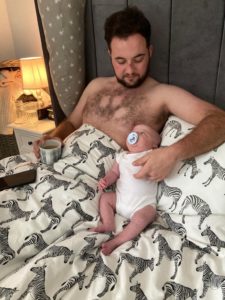 She said: “They did everything that they possibly could for him. I had been looking after him at home and never realised how poorly he was. When I got the call to say he was in a dangerous condition and the next 24 hours were critical it was such a shock. It was horrendous and I was on my own with a newborn baby. But he is home now and we will be forever grateful for what they all did for Aaron and for all the support we have received from friends, family and Aaron’s colleagues at ME Projects Ltd based out of Mansfield. There are so many people we would like to thank.”

Deputy Sister Burnett said: “Aaron was very poorly and we were all very worried about him. But to see him walk out of hospital to go home to Emily and Rae was all the thanks we will ever need.”

Aaron admits that although he wore a mask and tried to socially distance he wasn’t as strict as he should have been. “I just assumed that I would be ok,” he said. “I am a 27-year-old healthy man, with a young family and never dreamt that this would happen to me. But this is the thing with COVID, we just don’t know enough about it. Please, please, please do not take any chances with your health and follow the rules by staying home during lockdown.

“Please for your loved ones, wear a mask, wash your hands, socially distance and take this virus seriously. It may be tough, but I now know in the grand scheme of things your health and your family is all that matters. And when you’re fighting for every single breath, that becomes more important than anything.

“If it happened to me, it really could happen to anyone.”