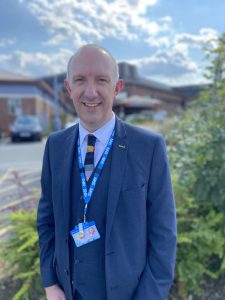 Dr Farquharson trained at the University of Dundee, then undertook general medical training in Tayside, followed by a period of research sponsored by the British Heart Foundation. He then progressed with advanced training in Cardiology in Yorkshire, as well as at Harefield Hospital (UK), Los Angeles (USA) and Adelaide / Melbourne (Australia). He achieved Completion of UK Specialist Training (CCST) in Cardiology/General (Internal) Medicine in June 2005.

He worked as a Consultant Cardiologist at the Diana Princess of Wales Hospital, Grimsby, between 2005-2012, concurrently holding the honorary academic post of Senior Lecturer at Hull-York Medical School. He then took up the post of Senior Staff Cardiologist/Professor of Cardiology at Royal Darwin Hospital, Australia between 2012-2015, returning back to North East Lincolnshire in 2016, to take up his current role.

The Trust’s Chief Executive, Andrew Morgan, said: “Dr Farquharson’s appointment as Medical Director is great news for the Trust and our patients. His wealth of experience and knowledge will be invaluable, not only as we continue to respond to the COVID-19 pandemic, but also as we look to the future.

“I would also like to take this opportunity to thank Dr Neill Hepburn for all of his dedication and hard work as our Medical Director over the last four years during the most challenging of times for the NHS. We will still see Dr Hepburn in our hospitals as he continues his work as a Consultant Dermatologist at the Trust.”