Patients who are at greater risk of becoming seriously unwell from COVID-19 have praised a new service designed to aid their recovery from the virus and keep them out of hospital. 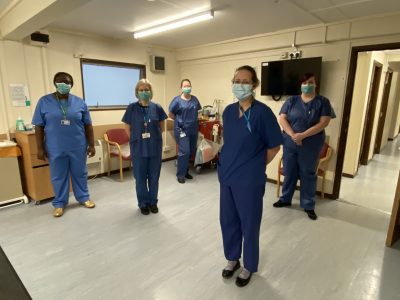 Hospital patients admitted with COVID-19 have been able to have anti-viral treatments in Lincolnshire since September 2021.
These help

boost a patient’s own immune system so that they are able to fight the virus sooner and prevent more serious symptoms and long term side effects.

Just before Christmas a new service was launched in the county, where patients diagnosed with COVID-19 through a PCR test who have certain underlying health conditions that mean they are at an increased risk of being admitted to hospital, can now have the anti-viral treatment as an outpatient.

They are referred to the service by their GP or NHS111, assessed by a nurse and a consultant to see if they are suitable for the treatment and then invited to attend an appointment at Lincoln County Hospital. They are then put on a drip and the anti-viral is delivered straight into their blood stream so that it can start working straight away.  If they are assessed and unable to have the anti-viral intravenously, they may be offered an anti-viral tablet.

United Lincolnshire Hospitals NHS Trust Medical Director, Dr Colin Farquharson, said: “In the first month, more than 130 patients from across Lincolnshire have benefitted from this new service. The aim is to get these patients the treatment they need as soon as possible to prevent them from becoming seriously unwell from COVID-19. The feedback from patients has been so positive and is testament to the hard work of everyone involved in helping to set up and run the service. It is very much a team effort that sees colleagues from across the Trust working with GPs, Lincolnshire Community Health Services NHS Trust and other healthcare partners from across the county.” 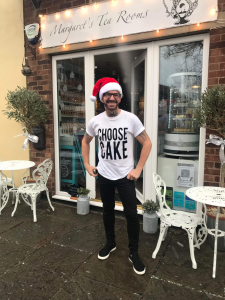 Des Davis owns Margaret’s Tea Rooms in Lincoln and believes that the team saved his life. Des, 54, has a condition that means he has a compromised immune system.

He said: “I had started to feel unwell and it got a lot worse, very quickly. I did a lateral flow and I had also been sent a PCR test which I sent off in the post and less than 24 hours later I knew I had COVID. By this time my symptoms were a lot worse and I was really starting to worry.

“When I got the call about the treatment I was so relieved when they said I was eligible. I went straight to the hospital, had the treatment and then went home to my bed.

“I still felt really poorly, at one point I kept getting sharp stabbing pains all over and I feared the worst, but gradually the symptoms started to wear off. I dread to think what might have happened if I hadn’t had the treatment. I honestly believe I would have ended up in hospital and who knows. I am so grateful to the team. They were all wonderful and I believe that they have saved my life.

“Thanks to them my body now feels like it is recovering from the symptoms, rather than fighting the virus. I will always be so thankful.”

A 32-year-old patient with Multiple Sclerosis who was also treated by the team added: “The whole team were lovely throughout and explained everything to me. I am so grateful to them. When I came in for the treatment I knew that they were putting themselves at increased risk by treating me. They were amazing and were quick to reassure me. I hate hospitals and my heart rate was fast, but by the end of my treatment it was back to normal and I was so relieved.

“I then left and was able to recover in the comfort of my own home. I had started to feel terrible, but after the treatment I started to improve. I cannot thank the team enough.”

Anyone eligible for this service will be contacted directly and assessed.