Staff up on ward 6b at the United Lincolnshire Hospitals NHS Trust (ULHT) site have transformed the day room into a World Cup themed rest area, so patients can watch the matches and not miss out on any of the action.

They’ve even adorned the walls with posters featuring the ‘World Cup Through The Years’, with information on every single tournament to date, to help keep elderly patients engaged and hopefully spark some memories and conversations.

Another addition includes a wall of posters featuring a host of World Cup legends, from Bobby Moore to Pele and every star in between. 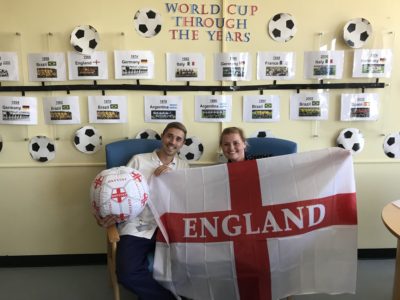 Patient and England fan Daniel Lunn (79), from Donington, is spending some time up on the ward after a fall earlier this year. 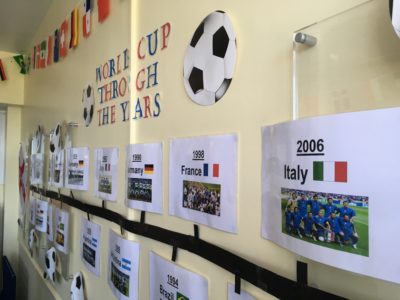 He said he’s really enjoyed being able to watch the football while in hospital.

“It was a real surprise when I saw this – a real breath of fresh air,” he said.

“You can read the papers until the cows come home but it’s important to keep active and get up and about.

“They’ve really gone to a lot of trouble here – it’s like a dream come true for me, I really take my hat off to the staff.

Pilgrim worker Sam Maddison said the room has proved extremely popular with all the patients.

“We had it ready for the first day of the tournament and we’ve had every single game on the TV since,” said Sam.

“We’ve been encouraging the patients to come down to watch the games and they were all in here for the England match.

“The patients remember the tournaments all the way back to the very first one and it’s great as it gets them talking amongst themselves.”