A mum says her dream of seeing her son walk into school on his first day may now be possible thanks to the skill and support of a team at Lincoln County Hospital.

Four-year-old Reuben Bescoby has suffered from hip dislocations all of his life, which have delayed his ability to walk. He is no stranger to surgery, having undergone five previous operations, including two on his heart. His conditions are not uncommon among children with Down’s syndrome.

A specialist team at the hospital had been planning to perform complex hip surgery on Reuben, which had to be delayed due to the COVID-19 pandemic. But his mum, Jade, has thanked the team who made sure Reuben was among the first children to undergo planned elective surgery at the hospital in April. 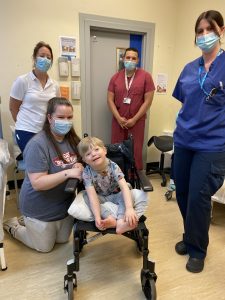 Jade said: “Reuben is a very active little boy and prior to the surgery his hip would regularly come out of the socket. He had started to take a few steps but would often fall due to the dislocations.

“We are now hoping that we can get him walking and it would be amazing to see him walk into school on his first day in reception class in September.”

Due to his medical needs Reuben had the support of many teams from across the hospital. This included surgeons, anaesthetists, advanced care practitioners, physiotherapists, Rainforest Ward staff, theatre staff, radiology staff and occupational therapists.

Orthopaedic Surgeon, Mr Mohamed Hafez, and the team spent seven hours in the operating theatre reconstructing Reuben’s femur, as well as reconstructing his pelvis. This means that the head of his femur now sits correctly in the socket.

Paediatric Anaesthetist, Dr Pramila Vadde, who provides specialised care to many young patients with special needs during surgery, took care of Reuben during his operation and helped massively to ease his anxieties and discomfort following the surgery. Paediatric Orthopaedic Advanced Care Practitioner, Danielle Hewish, also played a great role in supporting Jade and Reuben during their journey.

Mr Hafez said: “Reuben is an amazing little boy and it is wonderful to see him so happy and pain free. It really has been a massive team effort and I know we are all proud of the progress Reuben is making.

“During the pandemic we have continued to perform emergency surgery but many of our planned elective cases have been delayed. By having the surgery now there is still time for Reuben to fully recover and enjoy going to school with all of his friends.”

Earlier this month, after 12 weeks in a plaster cast from his waist down to his knees, Reuben had the cast removed and is now able to move freely and is continuing with his recovery at his home in North Greetwell. Over the coming weeks he will start to learn to walk again.

Orthopaedic Practitioner, Kim Jenns, is part of the team supporting Reuben. She said: “Reuben is such a brave little boy, 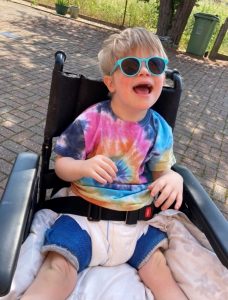 Reuben Bescoby in his cast

his smile is infectious and it has been a pleasure for us to support him and his family. The most rewarding thing for us as a team, is to see patients like Reuben recover from their surgery and learn to walk pain free. It really is the best feeling in the world and is one of the main reasons we all love what we do so much.”

Reuben’s mum Jade added: “Mr Hafez and the team have been amazing ever since we first met them, particularly leading up to the surgery and over the last 12 weeks. They have always been at the end of the phone if we have any questions or queries.

“Thanks to all of their skill and support Reuben now has his mobility and there will be no stopping him now. We will always be so thankful for the independence they have given him.”