A special reunion of Grantham and District Hospital staff has raised hundreds of pounds for the Hospice in a Hospital.

More than 100 staff, past and present, came together to share memories, reminisce and catch up at Grantham Squash Club at the end of last year. 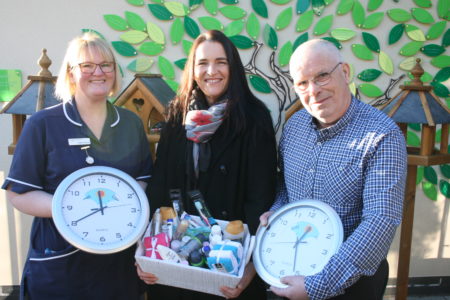 Through ticket sales and a raffle, the reunion raised £600.

Jane Walton, Theatre Sister at Grantham, said: “Bringing colleagues back together after 40 years had passed was such an achievement. Seeing lots of new faces come together with staff from the past was absolutely amazing. There was lots of love, laughter, hugs and tears on the night and the whole experience has been so overwhelming.”

The idea for a reunion was suggested on the ‘Your memories of Grantham hospital…past and present’ Facebook group which Andy Storey, Night Porter, had set up in September of last year.

Andy said: “I set up the Facebook group as a place for staff to share photos and stories from working at the hospital. As soon as it was set up people were reconnecting from all over the world after years apart. I couldn’t believe how quickly it took off and it now has more than 700 members.

“It was suggested by Jane that we should organise a reunion and when I put it to the group the response I got from people wanting to be part of it was phenomenal! That’s when I asked Jane to get on board to help with organising it. I’ve worked at the hospital for 31 years and Jane for 35 years and nothing like this has been done before!”

When Jane started to organise the reunion, she decided that as most of the friendships had been made at the hospital, it would be a nice gesture for all money raised to go to the hospice.

The money raised through ticket sales and a raffle was used to purchase six bird tables for the hospice garden and six easy-to-read, day and night wall clocks for patient’s rooms. The leftover money was then spent on a big box of toiletries for patients and their families to use when at the hospice.

Cathie Alcock, Hospice Ward Sister, said: “I can’t thank everyone enough for being so generous. The bird tables will be such a lovely addition to the garden and I’m sure our patients will enjoy watching the birds and wildlife that they’ll attract. Some of the patients who stay with us often aren’t sure what time it is, especially during winter when it gets darker earlier, so the clocks will be a great help.
“I’d like to say a huge thank you from all of the staff and patients here at the hospice to those who went to the reunion and donated.”

If you’d like to make a donation or arrange a fundraiser for the hospital, please contact the Charities Team on 01522 597584 or charities.team@ulh.nhs.uk