He was ‘called up’ to deliver a stash of new toys for youngsters to enjoy on United Lincolnshire Hospitals NHS Trust’s rainforest ward at Lincoln County Hospital.

The toys were bought thanks to funds raised from a charity football match staged between club sponsors University of Lincoln and software company Selenity, earlier this year.

A total of £1,000 was spent on the goodies for the children to enjoy, which included a host of games and stationary to keep them entertained while in hospital.  The haul will now be split between rainforest and neighbouring safari ward. 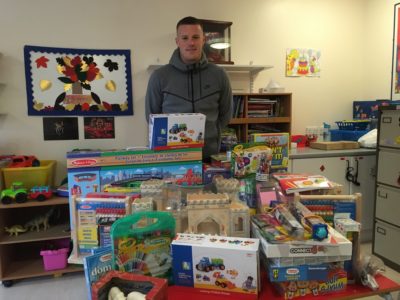 “It’s always a pleasure to come here and meet the staff and children, we try to visit at Christmastime too and I really enjoyed it last year,” he said.

“It’s never nice when you’re in hospital so if we can help to spread a little bit of happiness, it’s a great thing to do.”

Paul dropped in on his way to training as the team continue to enjoy their successful season back in the football league.

Donna Wilkinson, Play Leader on rainforest ward said it was lovely to have a local celebrity visit.

“We’re so grateful for this donation and we look forward to hopefully welcoming more of the team back at Christmas so they can meet the children and see what difference these toys will make.”

Rosie Damarell, Reward Officer at the University of Lincoln said:  “We’ve put on these charity matches for the past two years now and it’s a great way to support the local community.”

“We sold raffle tickets and some of the prizes were donated by local business.  The match was played on the 3G pitch at Sincil Bank in June and the final score was 5-2 to the university.”