Mr Watson, from Ancaster, near Sleaford, underwent a robotic radical prostatectomy as part of his treatment for prostate cancer at Lincoln County Hospital.

Posted on February 17, 2022 in Announcements

“It’s fantastic to have everything here in Lincolnshire.” That was the reaction of Ken Watson as he became the first patient to undergo an operation using a state-of-the-art robotic surgery system in Lincolnshire.

Mr Watson’s procedure was carried out by a surgeon sat at a special console connected to a robot which is designed to mimic the surgeon’s hand movements, enabling them to perform incredibly delicate procedures through the smallest of incisions.

It follows an investment of more than £3.2 million by United Lincolnshire Hospitals NHS Trust (ULHT) to bring the innovative technology to the county to offer more choice for urology and colorectal cancer patients as they undergo their treatment.

Mr Watson, from Ancaster, near Sleaford, underwent a robotic radical prostatectomy as part of his treatment for prostate cancer at Lincoln County Hospital.

Mr Watson (69) said: “It’s fantastic to have everything here in Lincolnshire. I could have gone to Leicester to have my procedure but it’s been even better to come to Lincoln.”

Speaking the morning after his surgery, Mr Watson added: “All of the staff here have been absolutely brilliant from the very start. Everything that I have needed, all of my appointments and everything, have all been done here in Lincolnshire. I have not had to travel out of the county, which has been so much better for my wife and I.

“It has really reduced the amount of stress and worry, knowing that we are going to our local hospitals and yet still having state-of-the-art surgery and the best care. I am a little bit sore, but everything has gone really well and I am so grateful.”

Mr Watson first went to his GP in September 2021 with symptoms including lower abdominal pain and backache.

He had blood tests and a scan, followed shortly by a biopsy, before being diagnosed with prostate cancer.Mr Watson said: “When I went to see Mr Alevizopoulos he explained everything to me, what the problem was, where it was and what my treatment would be. He said this type of surgery was coming to Lincoln and depending on when it arrived, I might be able to have my surgery in Lincolnshire. I was pleased to get his call again to say I could come sooner than we expected and to Lincoln.”

He explained: “It is a privilege to care for Mr Watson and to undertake the first surgery of this kind in Lincolnshire. We offer him our best wishes as he continues his treatment and recovery.

“Having this system in the county will make a real difference to patients like Mr Watson as it has a number of benefits.

“The robotic assisted procedure is less invasive, which comes with a reduced risk of surgical complications, meaning those having surgery will be expected to go home earlier and have a faster recovery.

Up to now, Mr Alevizopoulos has been performing robot-assisted procedures for cancer patients in Leicester General Hospital, as part of the East Mercia Urology Alliance with ULHT and University Hospitals of Leicester NHS Trust.

The new robotic surgery system will also be used for clinical teaching and learning opportunities in the future. 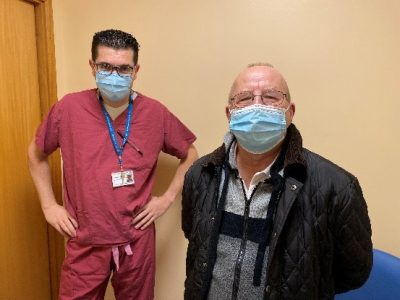 Mr Alevizopoulos (left) with Mr Watson (right) before the surgery. 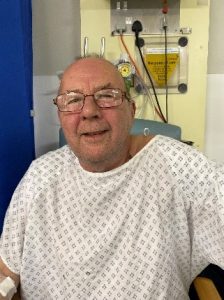 Mr Watson recovering in hospital after his surgery.