A £1.4m programme of fire improvement works is almost complete on a local hospital ward.

The 18-bed ward has benefited from new ceilings, flooring and patient bathrooms, in addition to a full set of brand new fire doors and new lighting throughout.

The third floor revamp is part of an extensive programme of works at Lincoln to update and improve the entire maternity wing. 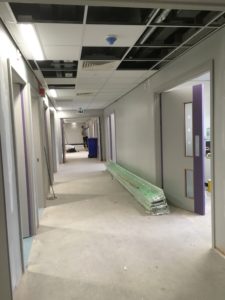 Next on the list for improvement is the ground floor antenatal and community midwife offices, but Mark Bigger, Estates Capital Projects Manager at ULHT, said the upgrades won’t stop there.

“Over the next 18 months, patients will see a massive transformation in the maternity wing at Lincoln,” he said.

“We have taken the opportunity to strip everything back and give the ward a complete refurbishment.

“All the doors have been widened to wheelchair standards and we’ve put in completely new ceilings and new sanitation areas.

“The new facilities are a real improvement for the maternity wing, which brings it up to modern day fire compliant standards as well as being much more suitable and as comfortable as possible for our patients.”

Karen Bird, Ward Sister on Branston Ward, said the staff were eager to get back into their newly refurbished surroundings, after being temporarily housed on the maternity wing’s fully fire compliant first floor for the past few months.

“It will be so much better for the patients to be back on the bright and fresh new ward,” she said.

“It’s also great for staff morale and everyone can’t wait to get on there.” 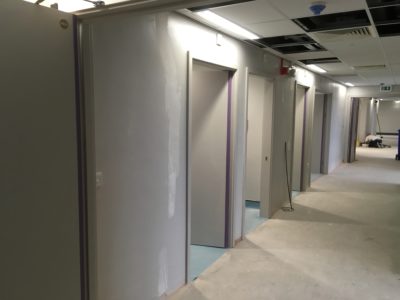 Last summer ULHT was handed two fire enforcements notices for Lincoln and Pilgrim Hospital, Boston, as well as an action plan to address for Grantham hospital.