Hospital staff have been praised for going above and beyond to make sure a patient was able to have a vital heart scan.

19-year-old Jake Baillie has a heart condition, which means he will need to have heart scans every 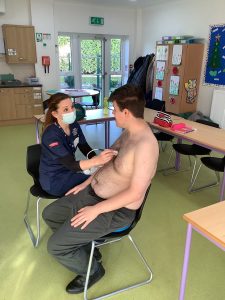 Pictured is Jake with Liz using the replica probe at his school.

few years. He was born with a bicuspid aortic valve, which means his valve only has two cusps (flaps) instead of three. This means he is at increased risk of the valve leaking or narrowing and may eventually need a valve replacement.

Jake is severely autistic and has severe learning needs, as well as other medical conditions. His heart condition was discovered by chance when he started having seizures three years ago and underwent some neurological and other investigations. He was then diagnosed with epilepsy, as well as his heart condition.

Jake’s autism means that he has to follow a strict routine, otherwise he becomes extremely distressed. His family and carers spend weeks and months preparing him for even the slightest change to his routine.

Jake’s dad, Clive, said: “Before previous hospital visits we would spend long periods of time preparing Jake and desensitising him so that he is ready for the change. We would introduce different routes so he would get used to the drive to the hospital. We would then gradually over time drive into the car park and get him used to the new surroundings.

“The last time Jake needed a scan, we managed to get him to the hospital and he tolerated about a minute with all of the sights and sounds and then he became so distressed that he needed to be sedated. He is such a strong young man. He is 6ft tall, weighs 16 stone and is so strong, especially when he becomes unsettled.

“It was so distressing for Jake and everyone involved, but we needed for him to have an MRI scan and an echocardiogram to understand what was going on.”

The results were crucial in diagnosing Jake’s conditions and getting him on the correct medication, but his heart condition will need regular monitoring. As Jake is now an adult, his family were told that he would need to travel out of the county to be able to have the scan under general anaesthetic.

Clive added: “I spoke to the team at Lincoln to see if there was any other option at all as I just could not see how we could prepare Jake for the journey and the new surroundings. Their response was simply amazing and blew me away.”

The team at the hospital agreed to try to perform the echocardiogram outside of the hospital in Jake’s home. His family and carers spent eight months getting Jake ready. Realising he would need to get used to the sensation of the scan, the family asked if there might be an old probe they could borrow.

Following conversations with the family, Chief Cardiac Physiologist Liz Scrivener reached out to Clinical Engineer Jack Simons to see if he could help.

Liz said: “After talking to Jake’s parents I contacted Jack to see if we had any old probes that they could use to help prepare him for their scan. Jack knew that we didn’t have any, but suggested straight away that he could replicate the probe used to complete the scan using the Trust’s 3D printer. He spent a lot of his own time designing, printing and painting the probe so that it was an exact replica. He even made sure that it weighed and felt the same. I showed colleagues and at first glance, they really could not tell the difference.”

Jack said: “It is great to be able to use our equipment to help others. In our clinical engineering team we don’t get to meet patients and have direct involvement in their care, so it was a real privilege to be able to help on this occasion. It was humbling, but also so rewarding to know that we could make a real difference.”

Clive and Jake’s carers then gradually got him used to the probe being against his chest and once he could manage 10 minutes they contacted Liz who then started to visit Jake at his school and home until she became a familiar face.

Liz added: “Jake allowed me to do the scan, which took about 15 minutes. He was brilliant. He did become unsettled at the end, but we managed to get the information we needed without any sedation.”

The great news is that Jake’s heart condition had not deteriorated.

Clive said: “We have had the great news that Jake will not need another scan for two years, but even better is the fact that we now know how to prepare him for it.

“I have been amazed by the response from the hospital. I asked for support and everyone stepped forward. Nothing was too much trouble and everyone has gone out of the way to ensure Jack has got the scan that he needed.

“Liz and Jack have been amazing and we are so, so grateful.”