A former COVID-19 patient and his family have returned to hospital to give their thanks to the Intensive Care Unit (ICU) Team they credit with saving his life.

Gordon Blackburn’s family say the team from United Lincolnshire Hospitals NHS Trust (ULHT) treated him ‘as if he was their own Dad’ after he collapsed at home and was rushed to hospital in October 2020. 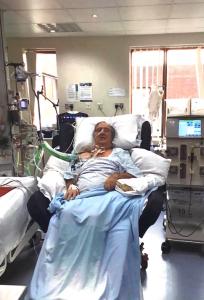 Unable to be at his bedside because of the pandemic, the Blackburn family spoke of the team’s kindness towards them, particularly through the support of their daily telephone calls.

Gordon’s wife Yvonne explained: “I got COVID-19 and about a fortnight later, Gordon got it too. Gordon felt dizzy, lost use of his legs and collapsed in the bathroom. We called for an ambulance and the paramedics found his oxygen levels were dangerously low. They took him to hospital and we assumed it was for some more tests, but I didn’t see him again in person until five months later.”

Gordon, from Wragby, was seriously ill due to COVID-19 and needed a tracheostomy – an incision at the front of his neck for a tube to be placed into his windpipe – to help him breathe. He was also put into an induced coma.

Gordon recalls being placed on a CPAP (continuous positive air pressure) machine, which gently gives air to a patient through a mask, but otherwise has very little memory of his time at Lincoln County Hospital.

Yvonne added: “It felt like we were on a perpetual roundabout. He had good days and bad days. We twice had calls to say the team didn’t think he was going to make it.”

Gordon was later transferred to a hospital in Leicester to continue his treatment. When he was finally well enough to be discharged, he spent a further six weeks rehabilitating in a care home. He had to learn how to walk, eat normally and talk again, and continues to feel side effects from having COVID-19.

As part of their thank you to the ICU team, Gordon and Yvonne presented a £300 donation on behalf of the Age Concern group in Wragby.

ICU Sister Donna Eaton, who was among those to provide the one-to-one specialist care to Gordon, was present to receive the generous gift.

Yvonne said: “We would like to give our thanks in particular to Donna. She was the one who spoke to us every day openly, frankly, kindly and looked after Gordon like it was her own Dad. Donna would put the telephone to his ear so we could keep talking to him.”

Gordon added: “We’re hoping the unit can use the money towards helping people who can’t come to the unit stay in touch with their loved ones. We cannot say thank you enough to everyone.”

Donna said: “It was very emotional to see Gordon again. We look after people who are incredibly unwell, but once they’re well enough to leave the unit or are moved to somewhere else, we do not always see them again. Seeing someone who you helped to care for is a very good feeling.

“We are very grateful to Gordon and Wragby’s Age Concern group for their kind donation.” 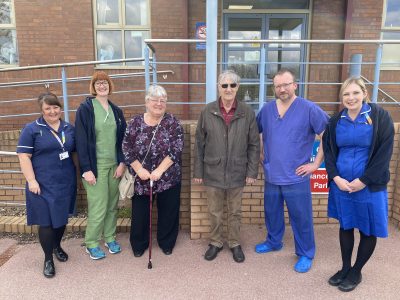