A group of charitable young people have raised over £1,000 to help buy children’s toys for a city hospital ward.

The generous group of youngsters, all from the Lincoln branch of the National Citizens Service (NCS) clocked up the cash by holding two charity concerts for children on United Lincolnshire Hospitals NHS Trust’s rainforest ward.

The money will now be used to stock up the stash of play equipment and toys used by youngsters admitted to the children’s ward at Lincoln County Hospital.

Donna Wilkinson, Play Leader on the ward, said she was extremely grateful for the donation.

“We’re always pleased to accept donations like this and we’ll be able to gets lots of new equipment for the children with this money – it’s really very kind,” she said.

“In addition to the money, the young people have also donated a PS3 and some games, an Xbox and they’ve even offered to build a wooden cabinet for us so we can put the TV on it in the room.” 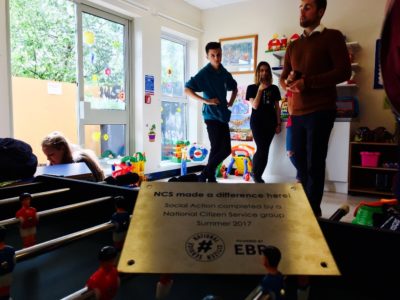 Around 14 young people, from the Lincoln branch of the NCS decided to raise the money by holding two local charity music concerts.

One took place at the Queen in the West pub in Lincoln, with the other being held at the Broadbent Theatre, Wickenby.

“I played guitar and sang and Ron played the drums,” said Ben.

“My brother has spent time on rainforest ward so it was great to be able to get involved and raise some money for the children.

“We performed some of my own songs and also some covers by Arctic Monkeys, Oasis and the Courteeners.

“There must have been about 100 people packed into the pub and it was a great atmosphere.”

Sixteen-year-old Harry Hughes organised the sound and lighting at the Broadbent Theatre.  “We sold 40 tickets and it was a really great night,” he said.

NCS group leader Nick Percy said he was impressed by the dedication shown by the group of young people.

“The whole team has been absolutely blown away by the dedication and selflessness of the group over the past few weeks.

“They should be as proud of each other and themselves, as we are of them.”

In addition to the cash donation, the team have also donated a plaque which will be proudly displayed in the ward playroom.