A local businessman was given a guard of honour by doctors and nurses when he finally left intensive care after spending more than three weeks fighting for his life with coronavirus.

A local businessman was given a guard of honour by doctors and nurses when he finally left intensive care after spending more than three weeks fighting for his life with coronavirus.

57-year-old George Barker from Sibsey, says he is only alive today thanks to all of the amazing care he received while at Pilgrim Hospital, Boston.

George had been looking after his wife Amanda and son James who had both been bedbound with suspected coronavirus when he first started to feel unwell.

Amanda said: “I had been so unwell and George had been taking such good care of me. I just remember every time I woke up he was starting to look more and more unwell. That was when I realised I needed to get on top of this.

“George is never ill and as soon as I saw him lose his appetite and fall asleep in the middle of the day I knew something was very wrong.”

Amanda had been calling NHS111, but when she saw her partner of more than 20 years deteriorate further she knew she had to call an ambulance, despite George’s protestations that he was OK.

Amanda added: “I snuck out of the room and called 999. When the ambulance crew arrived everything happened very quickly. I was not even able to give him a kiss and a cuddle to say goodbye. As I was tearful and walking back to the house I just heard George shout ‘I love you’.

“That was the last time I heard his voice for more than three and a half weeks.”

Once he arrived at hospital George was taken into intensive care and put into a medically induced coma.

Amanda, who could see the hospital from the couple’s back garden, got regular updates from the nurses on the unit.

“One day shortly before he came round we tried this and they told me that his eyes were flickering and he was responding when I was talking. It really was the best news. I cannot thank them enough for the way they supported me, as well as the care they gave George that saved his life.

“It takes a special person to be a nurse and I believe George’s were simply the best.”

George admits that he cannot remember very much about the ambulance crew or arriving at hospital. As soon as he came round George was determined to get better and when he was unable to walk the distance needed by the physios to be able to transfer him out of intensive care, he spent many hours in the night raising and lowering his legs to get his muscles working again. He managed to walk the distance the next morning even with his chest drain still in place. He was able to talk as soon as his tracheostomy was removed and he devoured all of the food around him when seeing if he was able to swallow.

Amanda added: “Once he came round he really did defy all of the odds. There was no stopping him.”

George added: “I thought the nurses were planning something, but I never expected to have a guard of honour as I left intensive care. Seeing them all cheering and clapping was such a surprise. Especially as I wanted to be the one clapping them.”

As his way of saying thank you, George has offered to do odd jobs for the nurses who cared for him through his business Dananglia Roofing.

He added: “I can never repay all of the doctors and nurses for what they did for me, but if ever they need any roofing work – they just need to give me a call and I will be there.”

The couple, who have eight children between them, one grandchild with another two on the way, are looking forward to spending time together as George continues with his recovery.

Amanda added: “I can never say thank you enough, so again thank you to everyone at Pilgrim hospital for getting George back home with me, as my life would have been so worthless without him in it.” 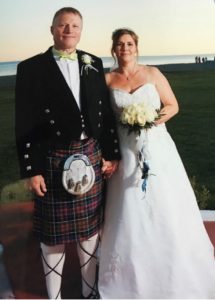