Children whose relatives have passed away in Lincolnshire’s hospitals are being helped through their grief thanks to generous donations by healthcare staff and the public. 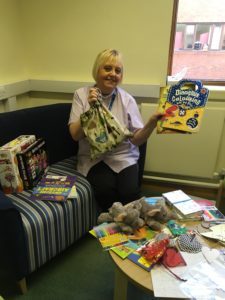 Pamela Beattie with some bereavement bags

These bags contain items to help them remember their loved ones, to comfort and entertain them and to help them to cope.

The bags were the brainchild of hospital chaplain Pamela Beattie, who introduced them after being called to a ward one day when a young mum had died and ward staff didn’t know what to do for the best to support her young son.

“On that occasion, I happened to have a sheep soft toy in my office and I took that and gave it to the boy and spoke to him about caring for him in his time of need and the fact that he shouldn’t think there was no one there for him who understood,” she said.

“I saw the difference that toy made to him, just making him realise that someone cares. Our staff really struggle at difficult times like these and don’t always know what to do with bereaved children, and so it came from there.”

She gathered support from hospital staff, volunteers and local businesses for her idea of creating bags for bereaved children, and has handed out more than 40 in the past six months.

“I’ve been overwhelmed by the support we’ve had. We’ve got people sewing bags for us and many individuals and businesses donating things to go in the bags, but we could always use more,” said Pamela.

“We make bags for different ages of child, including something for them to play with as a distraction, something to comfort them and something to help them remember their loved ones.”

Items in the bags include:

·         Information leaflets on bereavement for children

One family which has already benefitted from the bags are Jemma and Andy from Lincoln. Their daughter Isla (four) was given a bag after they sadly lost twin boys at 17 weeks pregnant.

“It’s really helped to distract her and there are items within the bag that she has used to remember the boys. The book is amazing and explains the journey from life to death brilliantly. Isla also sleeps with the teddy from the bag and wanted us to blow up the balloon straight away.

“It’s very hard as a parent to lose your babies but even harder when you have another child and have to explain this to them. Where do you start was the biggest question we had, but this bag gave us tools that we could use not only to distract Isla but to explain to her what had happened. She was then able to continue to use items in the bag to remember her brothers.”

Donations for the bags are welcome. All items need to be new. They can be made by getting in touch with the chaplaincy team at Lincoln County Hospital on (01522) 573080 or by emailing pamela.beattie@ulh.nhs.uk