Volunteers from RAF Waddington gave up their spare time to help renovate their namesake ward at Lincoln County Hospital.

Waddington Unit has now welcomed back patients and staff, after being temporarily relocated while improvements have been made.

The RAF volunteers were drafted in by United Lincolnshire Hospitals NHS Trust’s (ULHT) Advanced Care Practitioner for Oncology, Marie Beck, who was keen to maintain a local link with the base and the unit.

Over the past few weeks, the RAF personnel have helped to redecorate two patient bays, the staff room and the relatives’ room, as part of a major refurbishment and upgrade of Waddington Unit, the haematology and oncology ward, which cares for patients receiving chemotherapy, radiotherapy and end of life care at Lincoln County Hospital. 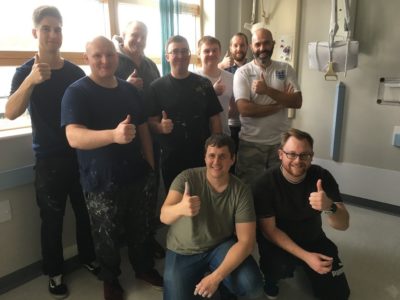 Marie said that she couldn’t thank the RAF personnel enough for giving up their spare time to help out.

“Our patients and staff are very grateful for their input. It has been lovely to create the link between RAF Waddington and Waddington Unit.

“This is a relationship that we hope will continue to flourish further over the coming months and years.”

Cpl Michael Peel from RAF Waddington said: “We had previously helped out on the ward and wanted to maintain our relationship with Waddington Unit.

“A group of us got together and over the course of three days managed to refurbish the majority of rooms. 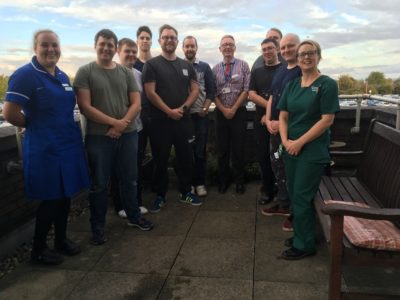 “We hope the staff and patients enjoy our efforts and if the staff need us again we would gladly help out.”

Polly Johnson, Waddington Unit Manager said: “We are extremely grateful for all the hard work and efforts put from the volunteers from RAF Waddington.”

“It has really improved the environment along with the patients’ and families journeys.

“A comfortable relatives’ room is important to us as it provides a sanctuary for people to have a little quiet time away from the traditional hospital environment with their families which allows time to reflect with their loved ones.”