A nurse who trekked for hours through the snow during the Beast from the East so that she could care for patients burst into tears as Chris Evans revealed that she had been named as Best Nurse in The Sun’s Who Cares Wins health awards.

Ward Sister Kat Mayer spent more than three hours walking 10 miles to get to work at Lincoln County Hospital in March this year after realising that driving was not going to be an option. 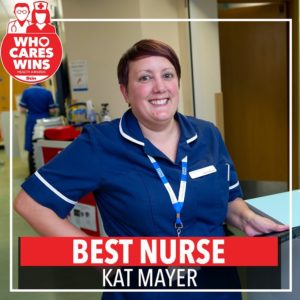 It was her decision to film and live stream her treacherous journey on Facebook in a bid to motivate herself to keep on going that caught the nation’s attention and it went viral.

Kat said: “I was so shocked and couldn’t believe it when I heard my name. There were so many outstanding nurses, doctors and teams in the room, it just reinforced why I am so proud to work for the NHS.

“I wasn’t the only one who walked to work that day, I was just the only one to film myself doing it. So many of my friends and colleagues went above and beyond to make sure that our patients were cared for and safe during the snow. This award is for each and every one of us who went the extra mile that day.

“In order to be the best you have to work with the best and I really love my job and the people I work with at ULHT.”

Kat even had to rescue her friend and colleague on the way. The pair met up and were walking through the Arboretum when A&E Sister Lucy Warner fell and hurt her ribs. Kat knew she had to get Lucy to hospital and after being checked over by colleagues she was told that she had a torn intercostal muscle.

Kat stayed with Lucy overnight in the hospital to make sure she was OK and in the morning got up after only a few hours’ sleep and returned to work.

Kat, Lucy and United Lincolnshire Hospitals NHS Trust’s Director of Nursing Michelle Rhodes were all at The Sun’s Who Cares Wins awards ceremony in London on Monday, surrounded by celebs and other shortlisted colleagues from across the NHS, when the winners were revealed.

Michelle said: “What an amazing night. We laughed, cried and celebrated everything that is wonderful about our NHS. I know Kat feels that she didn’t do anything out of the ordinary or any different to what many of our friends and colleagues from across the country did during the same period. However, Kat’s live streaming of her walk to work on social media caught everyone’s attention and has been viewed thousands of times.

“I think she is a shining example of what thousands of NHS staff did to make sure that patients up and down the UK were kept safe and well during the Beast from the East. She wasn’t alone, but she was the one crazy enough to film herself doing it.

“We are all so proud to be part of an amazing team who don’t think twice about going to these sort of lengths for patient safety.”