Two sisters who both work at Lincoln County Hospital are in training to tackle this year’s Virgin Money London Marathon.

Lucy Darby (40) and Emma Howard (33), have both signed up to the 26 mile challenge and are currently pounding the city’s pavements in a bid to get themselves fit for the race. 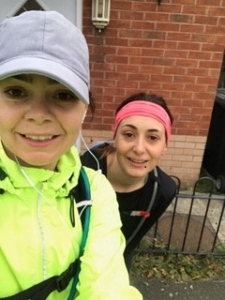 Lucy, a trained radiographer, bagged her marathon spot thanks to United Lincolnshire Hospital NHS Trust’s (ULHT) charitable funds team and she plans to run to raise cash for her radiotherapy department to help improve the experience for patients attending their appointments.

“I’ve never done a proper marathon before but I did do a cross country from Lincoln to Sleaford a week before my 40th birthday – although I didn’t tell anyone about it,” said regular runner Lucy, who’s looking forward to the main event which takes place on Sunday 28 April 2019.

“I’ve applied to run the London Marathon about five times in the past but never been successful so I’m really excited to be running it this year.

“I’ve always watched it on TV and enjoyed running.  I’m part of the Lincoln and District Runners club and go about three times a week if I can.  I also recently completed my 83rd park run.

“My sister, who also works at Lincoln, in the outpatients department is running it this year too as she managed to get a place. She’ll be running it just a year after having her second baby.”

Lucy, an advanced practice radiographer working in brachytherapy, treats cancer patients with specialised, targeted radiation. She’s worked for ULHT since 1998, starting in HR before progressing to bed manager. Later she trained to be radiographer and qualified in 2005.

“My target would be to raise £1,500 and with the support of my department manager and colleagues I feel this is achievable,” added Lucy.

“Fundraising is going really well so far with almost £700 raised. The patients in oncology have been very kind with their donations.

“In 2017, some of my team ran in the Lincoln 10K to raise money for the department. Our funds have previously been used to buy new comfortable waiting room chairs and iPods and speakers so patients can listen to music while receiving their radiotherapy treatment.

“I’m a regular runner and although it’s been a challenge training in the icy winter weather, I feel ready to take on the marathon challenge. My longest run has been 18 miles so far.”

Sister Emma said: “My training is going ok, it’s hard with a baby and a toddler but I plan the runs around them, going out before they wake up at the weekends.”

“With only a few weeks to go until the marathon now I’m getting a bit nervous but also very excited. I’m most looking forward to seeing Buckingham Palace at the finish.”

If you would like to sponsor Lucy, visit her Virgin Money Giving page to donate. 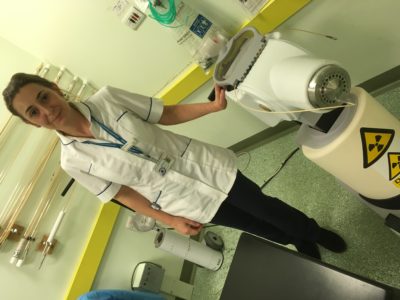