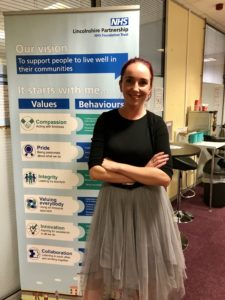 Kate, a trained Samaritan counsellor, was on hand to speak to staff about male mental health in the media, in light of the recent high profile storyline on Coronation Street featuring the suicide of former X Factor star Shayne Ward’s character – the loveable rogue Aidan Connor.

The focus of the talk centred around the positive response the show received from millions of viewers and the message of hope conveyed, in light of the traumatic nature of the storyline.

“In soaps we always try to make a point but when the suicide storyline was first pitched by a writer we all wondered whether it was a subject we really wanted to tackle,” said Kate, who is now moving on to produce the BBC’s Eastenders, Holby City and Casualty.

“It was clear that it was something that had affected a lot of people however, so I encouraged the team to share their experiences with me.

“A recurrent theme that kept cropping up was that no one could see this coming.  Aidan was a popular character who seemingly had it all, with a bright future and family around him, but he’d been quietly and progressively spiralling into despair.”

At the same time as Aidan was suffering his own plight the street was running a male rape storyline, with the victim David Platt looking increasingly like he was the one who would eventually take his own life.

When the final scenes aired and Aidan’s body was discovered, it encouraged David’s character to speak out and seek help, which is a message of hope Kate was keen to get across to viewers.

“I took some criticism for making the show too dark, but lots of people have come forward to tell me their own stories,” added Kate who drew on expertise from the Samaritans and the Campaign Against Living Miserably (CALM) charity in order to research the storylines.

“I like to think we left that message of hope, because out of Aidan’s tragedy David spoke out.

“It’s such a privilege to be able to tackle these subjects and have a voice through a show like Coronation Street.”

In addition to the keynote speech, delegates also heard personal stories from staff sharing their experiences of living with mental and physical health difficulties and how they overcame them, alongside mindfulness sessions and a talk around the importance of men keeping their physical health in check too.

Staff wellbeing lead at LPFT Nikki Gibson said: “Men’s health often gets overlooked. We know that men do not like thinking about their health or they postpone seeking help.

“This day was an opportunity for a dedicated time for our male staff members to talk about some of the most common issues affecting their mental and physical health.

“By supporting our staff we want to promote a healthy workforce and get the message across that men’s health does matter.”