Survivors of sepsis and their families are invited to a sepsis support group, the first of its kind in Lincolnshire. 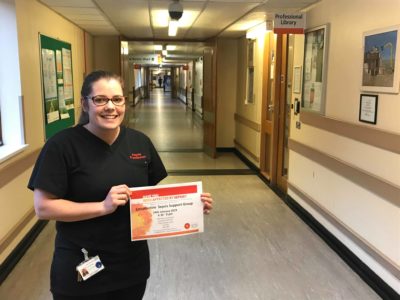 Sepsis, also referred to as septicaemia or blood poisoning is the body’s response to an infection and can lead to shock, multiple organ failure and death, especially if not recognised early and treated promptly.

Some sepsis survivors experience a variety of physical, psychological and emotional problems while recovering, known as post-sepsis syndrome.

Laura Strong, Sepsis Practitioner at United Lincolnshire Hospitals NHS Trust (ULHT), said: “Sepsis can have a huge effect on patients and their families. This support group is for anyone whose life has been touched by sepsis and will give people a chance to speak with others who’ve been through a similar experience. There will also be professionals on hand to offer support and advice.

“Whether you’ve had sepsis yourself, are a family member or friend of someone who has, or would just like to know more – everyone is welcome to come along.”

The first Lincolnshire sepsis support group will meet on Thursday 24 January at 6.30pm at the Lincoln Drill Hall in Lincoln.

Phil Crow is a sepsis survivor from Lincoln who has been working with the UK Sepsis Trust to set up the group.

Phil said: “When I came out of intensive care, it wasn’t clear how sepsis may affect me psychologically and I would’ve found it really useful to have a safe space like this to talk to people who’ve been through the same thing.

“We also welcome bereaved families who may want to ask further questions or would like to share their experiences.”

Dr Ron Daniels BEM, Chief Executive of the UK Sepsis Trust, said: “Post-sepsis syndrome is common and can affect people of any age, manifesting as both physical and mental after effects, so ongoing support for those who need it is vital. One of our four main aims is to support those affected by this devastating condition and each group helps us to achieve this.”