Recognition and celebration for hundreds of dedicated hospital staff

Staff at United Lincolnshire Hospitals NHS Trust (ULHT) have been recognised for their hard work and dedication at a special awards evening.

Staff at United Lincolnshire Hospitals NHS Trust (ULHT) have been recognised for their hard work and dedication at a special awards evening. 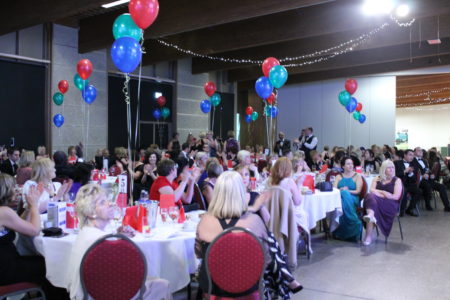 Last night, over 200 members of staff and patients from a wide range of roles across the Trust attended the annual ULHT staff awards at the EPIC Centre, Lincolnshire Showground which was hosted by BBC Radio Lincolnshire’s Melvyn Prior.

There were 14 award categories including awards for care, compassion and respect, great patient experience and unsung hero. Each highly commended and overall award winner was presented with a trophy or certificate by a member of the board, a patient representative, team manager or sponsor.

This year saw a record number of nominations with 690 received, all showcasing the enthusiasm and quality of care that is given to patients and colleagues. This is a huge increase from when the awards started in 2014 and received 150.

A raffle held on the evening also raised £558 to help fund next year’s event as the whole awards are funded entirely by sponsorship and charitable funds.

The evening brought together staff and patients from across Lincolnshire and provided a glimpse of the inspirational work and care that is delivered every day.

Jan Sobieraj, chief executive of ULHT said: “These awards are a wonderful way for us to celebrate and recognise the excellence of our staff.

“The individuals and teams recognised at this year’s awards span a wide range of jobs and all of our hospital sites, but they all have one thing in common – going above and beyond to provide the best care they can for the patients of Lincolnshire.

“We are incredibly proud of the staff working within the Trust, and would like to thank everyone for what they do.”

Trust Chair Dean Fathers said: “The stories we heard on the evening represent just a handful of the 690 nominations which were made for the awards this year, which demonstrates just how amazing our staff are and how grateful their colleagues and patients are.

“We hope everyone had a fantastic night.”

A full list of the winners and a description of why they were nominated is included below:

Debbie has been recognised because she is approachable, a good listener and has an ability to put people at ease, which has been reflected in a number of compliments made about her by patients. She is described as a credit to Grantham hospital- showing a high level of professionalism and caring even during the busiest times, and always being ready with a smile for patients and staff.

Clinical teams in endoscopy and general surgery at Lincoln hospital.

These teams have been recognised for a piece of work they have done to improve timeliness of cancer diagnosis for patients with lower gastrointestinal problems. Working together and with Lincolnshire West CCG, the teams have piloted a new referral system to speed up diagnosis and treatment for the benefit of patients. The pilot of this work has seen some patients diagnosed with cancer within 10 days of their initial appointment- compared to a usual wait of 28 days.

Sandra was nominated for providing consistent, strong leadership to her team resulting in patients being treated with dignity, respect and compassion. The nomination says she is a visible part of the team, she always ensures that staff know their role and what is expected of them and she never leaves at the end of the day without speaking and thanking each individual member of the team.

This team has been nominated in recognition of the work it has done alongside other departments on individual projects to improve patient experience. Particular mention goes to a piece of work to improve the efficiency of the x-ray porter working with Ward 2, which managed to reduce patient waiting times from 50 minutes to 25 minutes.

Susan was nominated because of her commitment and dedication to the hospital’s age-related macular degeneration service. She goes above and beyond to make sure all slots are filled for intravitreal injections, she telephones and speaks to each patient individually to support them in their care and also works hard to maintain a safe working environment in the department at all times.

Dave has been nominated by two different people in recognition of how he goes above and beyond to support patients and staff across the hospital. Described as a “remarkable man”, Dave has a special manner in positively dealing with distressed patients, has excellent communication skills and makes the staff working at the hospital at night feel safe.

Rebecca has been nominated by two members of the public for going above and beyond in helping people outside of work, including coming to the aid of a man who had been involved in a car accident near to her home and leading defibrillator training in her local community. She is described as a caring, respectful person who is an asset to the community and the NHS.

Volunteer of the Year Award

Paul has been nominated three times for going above and beyond, putting patients at ease, showing compassion, understanding, care and respect. Patients have given great feedback about his kindness, politeness and his gentle manner. He is always willing to help out with special events such as Christmas lights and baby memorial service.

Team of the Year- Clinical

The multi-disciplinary team working in Fotherby ward have been recognised for the outstanding work done to reduce the length of stay for hip and knee replacement patients to as little as 30 hours from admission to discharge. The team has worked well across a range of disciplines to achieve their goal and provide quality patient care, whilst getting them home as quickly as they can.

Team of the Year- Support Services

This team was nominated twice for how it has worked hard to embed a new complaints procedure and clear a backlog of overdue complaints. The nominations recognise that the team members all have incredible skills in calming people, making them feel genuinely listened to and ensuring that any questions people ask are fully answered. Mention is also made of their ability to work alongside clinicians to provide them with support and encourage timely responses to complaints.

Julie was nominated by a patient because of the huge difference she made to their experience after having a baby. In the nomination, the patient talks about the extra effort Julie put in to ensure she could breastfeed her baby in spite of issues with blood sugar that could have meant formula feeding. She says that Julie’s knowledge, friendly attitude and perception meant she they had the best possible care and their baby had the very best start in life.

Chief Executive Jan Sobieraj chosen the hospital operations teams at Lincoln County Hospital, Pilgrim Hospital, Boston and Grantham and District Hospital that he believed deserved special recognition for going above and beyond over the course of the last year particularly during the pressures each hospital has seen.

Chair Dean Fathers chose the winner of this award from among the shortlisted entries for all awards categories this year. The winner was Sonya Sargent, porter at Grantham and District hospital. The nomination for Sonya recognised how she shows care and compassion and clearly lives the Trust value of being patient-centred. The nomination mentioned a number of incidents where Sonya has gone above and beyond to respond to individual patient needs, including providing comfort and a listening ear when needed. She is described as a ray of sunshine.

This award was introduced this year to recognise Pilgrim hospital staff and teams who have gone above and beyond to display exceptional bravery, for the benefit of staff and patients. This was in relation to the fire that occurred in the tower block on Friday 31 March.

Photos are available of all winners and highly commended individuals and teams.