The neonatal unit at Lincoln County Hospital has been presented with new equipment after a staff member put the unit forward in a competition. 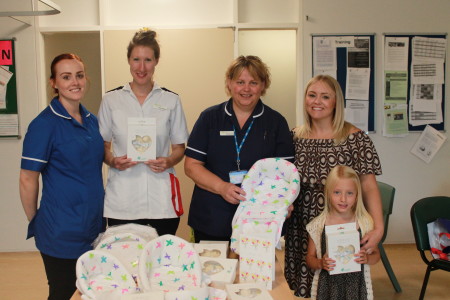 Jenna was a mum of an extremely premature baby born at 26 weeks nearly six years ago and praised the ward in her nomination for the care that baby Ophelia received. After having Ophelia, Jenna was inspired by the nurses and one year later began her journey towards her children’s nurse training and qualified in September 2015.

A number of families who had experienced great care on the unit also nominated the unit who won the competition alongside Chesterfield.

The mini boos will be used as comforters for babies on the unit. Research has shown that babies with comforters are much happier and more secure as they progress through certain milestones in their lives.

The new positioning nests will provide the best environment to contain and support the position of the baby, helping to facilitate normal physical development. They are designed and constructed with safe boundaries and comfort to aid physiological stability and support positive neurodevelopmental outcomes.

Rachel Wright, ward manager said, “We have received our prize of five positioning and 10 mini boos that will be extremely useful for the development care of the babies we look after on the unit. We are really grateful to receive this and are overwhelmed that these families felt we deserved this nomination especially as it was a nationwide competition.”