Lincolnshire’s hospitals are one of four pilot trusts across the country who have launched a new way to gather feedback from their younger patients with a monkey mascot.

Lincolnshire’s hospitals are one of four pilot trusts across the country who have launched a new way to gather feedback from their younger patients with a monkey mascot. 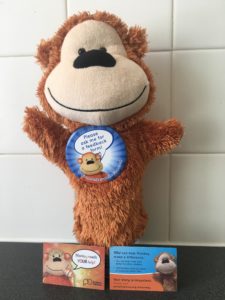 United Lincolnshire Hospitals NHS Trust is using Care Opinion which is an online feedback service and Monkey Wellbeing as a tool to gather comments and opinions from children and young people via a dedicated child friendly Care Opinion website.

The project is a partnership between Care Opinion and Monkey Wellbeing and aims to get more children and young people to give feedback online about their health care experiences. It has already been implemented onto the children’s wards and outpatient clinic at Lincoln County Hospital and is proving to be quite popular.

Feedback can be submitted via www.careopinion.org.uk/monkey. It is then used to inform any improvements to that service and we will respond to every story posted

Deputy Sister, Sharon Birkin said, “By allowing the children to give us their feedback, we can see it through their eyes and what their experience has been. We can then have a better understanding of what it is like to be a child in hospital, how they felt, what they liked, what was scary and also to tell us things that we could do to make it better.”

Patient experience manager Sharon Kidd said, “There is such a strong presence of Monkey on the ward, posters on doors, staff wearing badges, information in the parents’ room. In addition to staff collecting stories from children and parents, they thought of the idea of placing a monkey box in the parents’ room for anonymous feedback from parents to give instant and direct feedback. It also allows parents who do not feel comfortable giving face to face feedback, or feedback via the Care Opinion website to have their say about the care their child has received. It allows everyone to have a voice.”

Historically the NHS has focused on feedback from adult patients and service users but there has been a real shift in getting feedback directly from the children and young people who use NHS services.

“This project hones in on the importance of real time feedback from children, because they deserve to have their say, and demonstrates that the Trust is listening to all its patients,” said Sharon.

The initiative has received great feedback itself from the Trust executive team and is being used as an example of excellent practice by Patient Opinion, Scotland.

It is hoped that the continued success of the pilot will lead to the implementation of Monkey Wellbeing onto the children’s ward at Pilgrim hospital, Boston and the Kingfisher Unit, Grantham.