A Lincolnshire hospital ward has been recognised for its commitment to supporting carers following compliments from patients and their families. 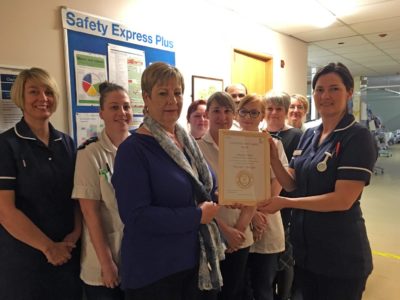 The award, presented by Every-One, is given to health and social care departments who have been proven to recognise the importance of carers in supporting their patients.

Clayton ward has been recognised following letters and cards from carers who found the team were supportive whilst their relative was on the ward and because they offer information about open visiting times for carers, free car parking and support for staff who are carers.

Averil Adams, acting ward sister on Clayton ward said: “I’m very proud of the team for being the first ward at ULHT to achieve the Lincolnshire Carers Quality Award. It gave us the opportunity to demonstrate the support we give to carers on Clayton ward; whether they are a patient who is a carer, a patient who has a carer or a member of staff with caring responsibilities.

“We attended carer awareness training and produced a portfolio of evidence to demonstrate the measures we take to support carers on the ward, and found it an interesting and rewarding experience.”

Sharon Kidd, Patient Experience Manager for ULHT said: “We know that people who care for patients on a long term basis get to know an individual’s needs more than anyone else. Therefore it is important that we view carers as expert partners and respect and listen to their views. Longer-term carers are likely to have valuable expertise and be skilled in caring for the patient and it is important that they are included in the care of the patient.

“In order to support carers we launched the carers badge six months ago, which recognises and acknowledges the vital role of a carer and ensures that they are visible and involved in their relative’s care. As part of this we also asked wards to undertake the quality award accreditation.”

Ward 1 at Grantham and District Hospital and ward 7B at Pilgrim Hospital, Boston have also submitted their applications for accreditation. As part of the Trust’s new patient experience strategy all wards will work