Patients requiring ankle replacement surgery can now be operated on and return home the same day, thanks to a brand new way of working at a county hospital.

The innovative practice has been adopted to ensure patients only remain in hospital for as long as absolutely necessary and is being carried out by trailblazing Consultant Orthopaedic Surgeon Harish Kurup and his team at Pilgrim Hospital, Boston.

Mr Kurup has recently completed the surgery on two patients at Pilgrim, which is run by United Lincolnshire Hospitals NHS Trust (ULHT), and hopes more will take place in the near future.

Usually, patients requiring a new ankle need to be admitted overnight and kept in hospital for up to two days. 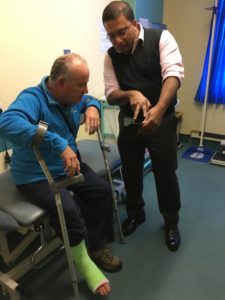 Now, depending on a patient’s age and how well they can manage on crutches after surgery, Mr Kurup and his team can carry out the entire procedure in a morning and release the patient by late afternoon.

“I’ve have been doing ankle replacements since 2011 – we’ve done around 45 at Pilgrim since then,” said Mr Kurup.

“In the UK around 600 to 700 replacements take place every year and last year at Pilgrim we did 11. Only about 15 surgeons in the country do more than 10 a year.

“We normally admit the patient and keep them overnight, that’s the standard.

“But we wanted to make it easier for patients, keep them in hospital only for the duration that is absolutely necessary and send them home so they can enjoy their own comforts.

“Day case patients are much more comfortable in their own homes and this also frees up bed spaces to avoid other operations being cancelled, helping to reduce costs on overnight stays. It’s a saving of around £400 in total.”

The very first day case ankle replacement was carried out successfully at Pilgrim at the end of November, with a second following closely behind in early December.

Tim James (56), from Boston underwent his procedure on Tuesday 28 November.  His surgery took place at 10.30am and he was released home at 6pm on crutches and with painkillers.

“Tim suffered from arthritis in the ankle for many years, he was in constant pain and it was starting to affect his daily activities.  We gave him a brand new, two-piece metal and plastic ankle joint,” added Mr Kurup.

“He had a general anaesthetic for the two-hour procedure, woke up after surgery and was transferred from recovery to the day case ward as usual. 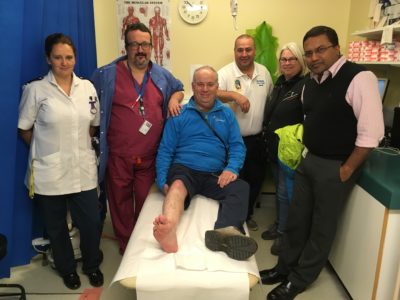 “I saw him two hours later and observed him walking with crutches, we made sure he had the correct painkillers and he went home the same evening.”

After the success of the first two operations, Mr Kurup estimates that around eight procedures could be carried out as day cases at Pilgrim every year.

Tim, who works at Siemens in Lincoln and hopes to be back to work in the next few weeks, said he was extremely impressed with way his surgery turned out.

“I had a car accident about 30 years ago and broke both my legs quite badly, my ankle was damaged and I was told I’d probably suffer with arthritis later in life,” he said.

“I’ve had pain ever since but it got to the point where I needed to get something done about it so I went to see my GP and was referred to Mr Kurup.

“I’ve had quite a few operations over the years and thought I’d be in hospital for a couple of days, when it was explained that I’d be in and out in the same day I didn’t have any objections to giving it a go. 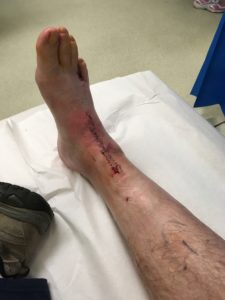 “I was the first one to have it done at Pilgrim so I was quite lucky really.  Using crutches is no new thing to me, so I was up and out of bed, down the corridor and into the car in no time – it all went very well.”

Tim had a new cast put on 48 hours after his operation and received a follow up appointment two weeks later to remove his metal stitches and review his progress.