Two NHS workers faced the challenge of a lifetime after taking part in a 100km ultra-marathon to help raise funds for patients on their ward.

Deborah Birch and Hayley Norton, who both work for United Lincolnshire Hospitals NHS Trust (ULHT), recently took part in the infamous Race to the Stones, covering 100km in 24 hours and raising more than £1,000 en route. 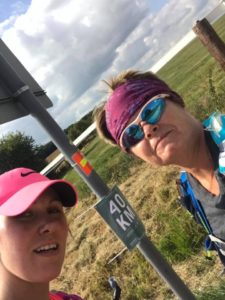 The firm friends, who are both avid runners in their spare time, wanted to raise money for ULHT’s Frailty Assessment Unit, to help improve the environment for frail and older people and those with dementia who are admitted to hospital.

They have been training for months and Assistant Practitioner Hayley, said it was a test of endurance she’ll never forget.

“I’ve always been a runner, but the furthest race I had ever done was 10km,” said Hayley.

“I’ve entered the London marathon seven times and never got a place, so when Debs said she wanted to do an ultra before she was 50, I asked if she fancied company.

“I didn’t realise just how intense the training plan was, especially the last eight weeks. Some training runs took up to seven hours. 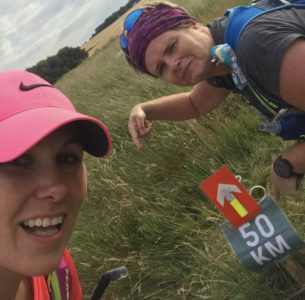 “One of the hardest parts of the race was the hills. They were impressive and my legs are certainly not thanking me for it.

“The atmosphere from start line to finish was unbelievable, everyone only had words of encouragement or giggles – we laughed so much.

“The crew at each pit stop couldn’t have been more helpful, with funky dancing, smiles or just helping you get food or top up your water.

“Watching the sunrise was incredible and I had the quickest last pit stop to have my feet taped and then just get going again.

“The patients I have spoken to have been amazed and thankful for the dedication we have had for the training – we have had a lot of families asking about it, most thinking we are absolutely bonkers. 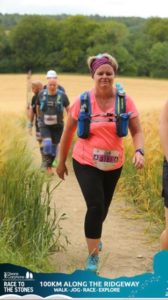 “I also had a patient who I had chatted to about the race, who came back in to thank us on the ward and gave a lovely donation to the cause.

“The money will likely go towards equipment and resources to make the ward more dementia friendly, but anything to help make the patients stay more comfortable.”

Although both Deborah and Hayley had trained for months and were as mentally and physically prepared as they could be, their race was not without incident.

Disaster struck for Deborah at the 80km mark, when an injury to her knee forced her to retire, leaving sidekick Hayley to complete the final stretch of the trek on her own.

“I trained solidly for this race for the past year with the last two months basically a work, run, eat, sleep, repeat cycle, so to have had to pull out after working so hard was gut wrenching,” said Deborah, ULHT’s consultant nurse for frailty. 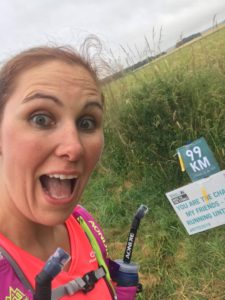 “I have no idea what happened – it was about 1am and Hayley and I had just left pit stop seven, with about 70km already covered.

“I started to get a pain in my left knee that just got worse and worse, to the point where there was just no chance of running – even walking was proving a challenge.

“By the time I reached pit stop eight I was struggling to move. The pain was pretty special but I had hoped the medic would be able to tape my leg to give me enough support.

“After examining it however he said that I had seriously damaged the cruciate ligaments of my knee and if I was to continue I could end up doing serious damage.

“Pulling out was one of the hardest things I have ever had to do. Hayley and I were both absolutely exhausted by this point, and having to watch Hayley go off into the dark on her own to continue was gutting.

“Running in the dark with only a small head torch is very scary and to go back out on your own shows she is one special lady.” 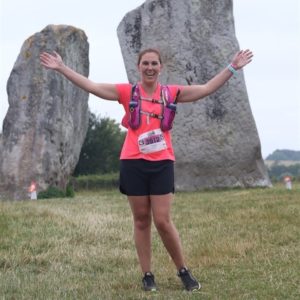 Despite her setback, Deborah said that the experience on a whole was extremely worthwhile. She has also been confirmed her medal – with 80km under her belt well worthy of an ultra-marathon title.

“The atmosphere was unbelievable,” added Deborah.

“The race is considered one of the best ultra-marathons and every 10km there is a pit stop with people to cheer you on, get you a drink and basically do everything they can to encourage and motivate you to get through it – nothing is too much trouble.

“There is always another runner not far from you and the smiles and words of encouragement from each other is very special.

“I started running four years ago at the grand old age of 45, using a basic couch to 5km app.

“I did the London marathon last year as I was luckily enough to get a ballot place and that was an amazing experience because it’s probably the only time I will ever be able to say I was in the same race as Sir Mo Farrah. 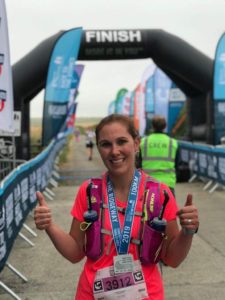 “I hope the money we raise helps in some way to improve the experience of someone who is frail having to come into hospital. It can be such a scary time for them so if we can do something that makes that slightly easier or helps to distract them from being in hospital it has been worthwhile.”

In summary, Hayley said that she wouldn’t have wanted to run with anyone else and is already looking forward to the next challenge.

“Being cold, tired, in pain, and with no side kick towards the end in the fields and woods was interesting. But knowing Debs and my family would be at the finish line made me kick on and get it finished,” said Hayley.

“It was a great challenge to do with a great friend and I couldn’t have asked for a better running buddy. Now it’s time to rest and recover before Debs comes up with another totally crazy challenge.”

You can still donate to Deborah and Hayley’s cause. Visit their JustGiving page here.

For information on the Race to the Stones visit the website – www.racetothestones.com