Posted on February 23, 2018 in Announcements

What do you like best about your job? My fab team, and the variety and pace of work at ULHT. I am rarely bored. 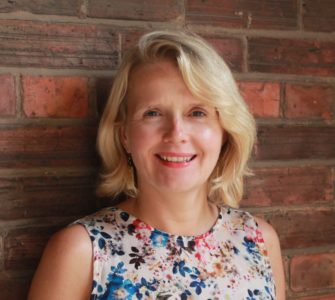 Who or what inspires you?
Professionally it’s a journalist called Paul Mason. He’s the best economics reporter around. He explains such dry, complex information in an entertaining and accessible way. It sounds easy but it’s so hard to do.

I was obsessed with his daily vlogs on the Greek financial crisis. When I have to write something dry, I try to think what he’d do but he’s in a league of his own but he inspires and pushes me.

For my birthday a few years ago, my boyfriend asked him to record a birthday message for me. He went totally off script and recorded a report with me as a political rebel. I loved it.

Name one thing you couldn’t live without?
Good coffee. I like it too much, so every now and again I try to give it up but fail miserably. I now recognise it’s too hard to give up and it’s too nice, so I don’t try anymore.

How would your friends and colleagues describe you?
Calm, logical and depending on how much (or how little) coffee I’ve had quiet or gobby, fun or serious.

If you could have any superpower what would it be?
To fly. I love the idea of having such freedom and it would allow me to be spontaneous. And no more queuing at airports.

What was the last thing that made you smile?
Next door’s cat Poppy trying to open the wardrobe door.

Who’s your favourite band?
Manic Street Preachers. I’ve loved them since I was a teenager when I first heard Motorcycle Emptiness. Even though they’re getting on a bit now, they’re still political and angry with the world, and have more energy than most younger bands.

Where is your favourite place in the world?
I love Manchester as I lived there for years and it’s my spiritual home. I consider myself an honorary manc. The people are cool, the nightlife has everything and it’s home to the best football team in the world.

Closer to home, I’d pick Anderby Creek as it’s quiet and the beach is magical. I love running on the beach. Often you don’t see any people but you see seals who come onto the sand to play.

If you could change one thing about where you work what would it be?
I’d like more money for development for ULHT and my team, even just to attend one day conferences and networking events.

It’s so important to keep up with the latest thinking, meet other people from similar organisations and share the good stuff and sometimes the pain. My team don’t have many opportunities for this, and in other jobs I’ve really benefited and it’s helped my career. I wish they had the same opportunities.

How would you like to be remembered?
As someone who made the world a better place and someone who loved. I’d also like to be celebrated as the oldest person in the world!